On Easter Day, always and above all else, quite simply and gloriously, we are celebrating what God has done.  And what God has done is to have raised Jesus from the dead: as Peter proclaims in Acts, God raised him on the third day.  And in St Mark’s Gospel it’s the same with the young man at the tomb speaking to the terrified women: He has been raised. Mark takes only 8 verses to tell us this as opposed to more than 10 times that number to tell us of Jesus’s death and burial. Many people saw Jesus being put to death, and so there was much to say, but nobody saw God raise Him from the dead, nobody could or can describe precisely what God did, or exactly how God did it.  None of the Gospels, nor any other writing in the New Testament, even tries.  Attempts to do that, in art, drama and film, unless they are very subtle indeed, mostly fail and are, anyhow, pretty much beside the point.  Because the point is that, in fact, Christ has been raised from the dead. An event in history yes, but an event pointing way beyond all history and having its origin not in human history but in the life of God and in the wonderful purposes of God for human history.

One of the things that I love about St Mark’s announcement of the resurrection in particular is the ending of it: So they went out and fled from the tomb, for terror and amazement had seized them; and they said nothing to anyone, for they were afraid. No faith there, no response of joy, no belief in what God had done: presumably that all came later.  Oddly enough, this is very important, this focus on the announcement of Jesus’ resurrection and not on the faith of its witnesses.  And for this reason: faith doesn’t lead to talk of Jesus being raised from the dead, but rather Jesus being raised from the dead makes faith possible.

What kind of faith does the fact that God raised Jesus from the dead make possible?  Above all, a baptismal faith: renouncing evil, turning away from wrong-doing, becoming good news and sources of blessing in the world, seeking what is just and peaceful and caring for God’s creation, playing our own part in the worship, prayer, faith and action of all God’s people. It is the baptismal form of faith that is always most powerfully celebrated at Easter either at Baptism itself or in the renewal of Baptismal promises.

The people who got rid of Jesus believed quite reasonably that they had seen him off once and for all. But they were hopelessly wrong. As Peter said, they put him to death by hanging him on a tree, but  – the biggest “but” of all time really – God raised him from the dead.  Theirs was not the last word, God’s was, and is and always will be, a word of imperishable life to make faith in an imperishable life possible.

The Prophet Jeremiah said in his Lamentations

“Is it nothing to you

All of you who pass by?

Look and see if there is any sorrow like my sorrow!”

This is a prophesy about the suffering of Jesus which

we remember during this Holy Week.

The suffering of Jesus

as he approached his crucifixion.

Our display this HOLY WEEK

is to help us to remember

those who continue to suffer

as they seek to escape violence in their own land

and to find a better life.

So we pray for all migrants

especially those who suffered

and the many who died in the attempt

On Sunday, 12 June, as part of the weekend of celebrations for the Queen's 90th Birthday, Gatehouse Churches Together are holding an ecumenical service in the Church of Scotland at 3pm.

The Service, will be a joyful celebration of the Queen's 90 years, and will include ten hymns, two of the Queen's favourite readings from the bible, and four prayers approved by the Queen.

Tea and cake will be offered in the hall after the service. 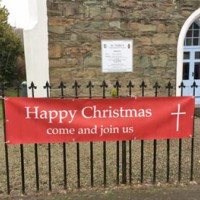 We were blessed with over 80 people coming to our Christmas Eve carol service at 5pm, and we also celebrated with our 9.30 Sung eucharist service on Christmas Day. 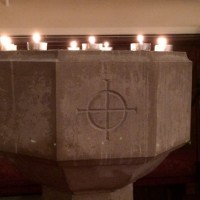 There was an Taize service held on the 27th November 2016 at St Mary's church to mark Advent.

The congregations of both Greyfriars and St Mary’s celebrated the arrival and institution of our new rector Reverend Stephen Hazlett on the 29th September. There was a joint service which started at Greyfriars at 10am and concluding at 11am at St Mary’s. The Service was led by The Right Reverend Dr Gregor Duncan assisted by the Reverend Canon Drew Sheridan, the Bishop’s Chaplain. We were blessed with a number of visiting clergy, and Father William McFadden and Rev’d Val Ott were the ecumenical presenters in each of the church services. After the service we had a joyful celebration lunch in Gatehouse at the Community Centre.

We are so pleased to welcome Stephen and his wife Hazel and their family to our communities.

Welcome to our new Rector and his wife Hazel.

Both Greyfriars and St Mary’s congregations will be joining together to celebrate the arrival and institution of our new rector Reverend Stephen Hazlett.  There will be a joint service starting at Greyfriars at 10am and concluding at 12am at St Mary’s.  The Service will be led by The Right Reverend Dr Gregor Duncan assisted by the Reverend Canon Drew Sheridan, the Bishop’s Chaplain.  Clergy attending have been invited to robe.  After the service we will have a celebration lunch in Gatehouse at the Community Centre.

We are so looking forward to having Stephen’s wife Hazel and their family and friends with us and welcoming them to their new charges.

The vestry secretaries of Greyfriars and St Mary’s. 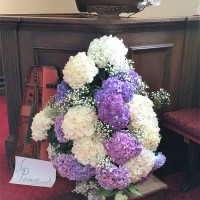 St Mary's was open every day during Gala week (10am - 4pm), decorated with an exhibition of flowers, representing different moods. There were also some paintings available to purchase.

Announcement of Our New Rector:

St. Mary’s and Greyfriars are very pleased to announce that Reverend Stephen Hazlett will be joining as our rector. His institution will be on the 29th September 2016 conducted by the Right Reverend Dr Gregor Duncan, Bishop of Glasgow and Galloway.

The new front doors at St Mary's have been fitted, starting on the 21st Juy 2016.  We are thrilled!!

Some of the ladies of St Mary's and other friends excelled themselves at knitting a large collection of knitted articles which will be taken over to Grangemouth for distribution by the chaplain of the Mission to Seafarers. There are 30 hats, 5 pairs of mittens, 8 balaclavas, 3 scarves and, would you believe, 34 pairs of socks, great for keeping seafarers feet warm!