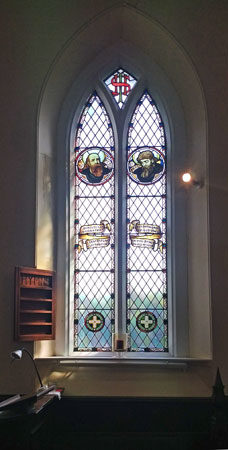 When the church of Scotland ceased to be Episcopalian, and the Presbyterian system was established by the "rump" Parliament of 1689/90, Episcopalians set up their own churches in halls, houses or the open air, wherever there was public support - namely the main towns and cities and most of the country north of a line joining the Clyde to the Tay estuary.

It was a different story, however, in an area like Galloway where the Covenanters had been strong, and where, as soon as law and order broke down in 1688, Episcopalian clergy roughly ejected. Only in a few "great houses" did Episcopalian worship continue sometimes illegally.

Episcopalian worship returned to the parish of Girthon in 1799, when James Murray of Broughton and Cally, opened an Episcopal Church. No Scottish Prayer book was available at this time. In 1820 the chapel was dismantled. Later in the 19th century the Cally estate passed into the hands of Horatio Murray Stewart. A new chapel was built and a chaplain appointed, housed and paid for by the Laird. Once again there was a school there, which was later moved to Gatehouse and a surpliced boys' choir sang anthems each Sunday in the chapel. The Estate was probably the Town's largest employer so that the chaplain's duties would include "personnel management". By the beginning of the 20th century, the Episcopal Church was expanding rapidly. In the united Diocese of Glasgow and Galloway there was great missionary enthusiasm and the time seemed ripe to extend the church from the private chapel to the Town of Gatehouse.

One of the several schisms from the established Church of Scotland had built its church on the Anwoth side of the river in 1839. Having united with the U.F. congregation (whose Church is now the Rutherford hall) in 1909, their church building was redundant. It was at first let to the Episcopal congregation and then, in 1915, sold to them for £200. The Roman Catholics in the area had also been looking for premises and it is said that the U.F Kirk session chose to sell to us as the "lesser of two evils!". The first service held in this church by the Episcopal Congregation was on Sunday 26th September, 1909, Evensong conducted by the Revd. H.J.F.Payne, chaplain at the Cally. On the following Sunday Holy Communion was celebrated according to the Book of Common Prayer. In -1915, the building having been bought, it was dedicated by the Bishop to St. Mary.

World War 1 brought financial difficulties to many. The chaplaincy ended in 1921 at the Cally. The congregation found themselves too small to support a Rector of their own and in 1923 they were linked to Greyfriars Kirkcudbright paying at first £33 towards the stipend of the Rector. It was not until 1963 that Holy Communion came to be celebrated every Sunday.

Since then the congregation has grown steadily. Good ecumenical relations are now maintained with the other local churches. The building is a simple structure, which shows its Presbyterian origins and the somewhat undistinguished windows portray not only biblical characters but, uniquely in the Scottish Episcopal church, Martin Luther and John Knox! The building has a charm of its own and there is a good atmosphere.