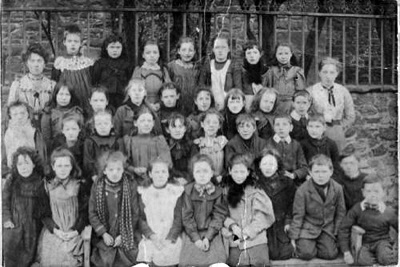 In July 1878 the Rev W M Ramsay of St Ninians, Castle Douglas formed a congregation in Kirkcudbright, using the Mason’s Hall, High Street.  Then in 1879 the congregation moved to a tin hut, known as St Cuthbert’s or the “The Wee Tin Kirk”.  It was leased from the Railway Company and stood on the site of the present fire station.

In 1917 the school building was purchased with a view to restoring it as a church in memory of Lady Watts son Lt Leslie Reid who was killed in World War l.  Recycling was as important then as now.  The altar table, pulpit, pews and gas fittings were removed from St Cuthbert’s to be used in the “new” building.  According to a newspaper report, a bazaar to raise funds opened by Lady Watts “proved a great success being heartily supported by all classes in the community.” Greyfriars was consecrated on the 26 October 1919 by the Lord Bishop of Glasgow & Galloway, Dr Archibald Ian Campbell and   Rev William George Howard MA, who as priest in charge had opened the church for services five weeks previously on 21 September (St Matthew’s Day).  The church also purchased a Parsonage at 54 High St, formerly known as The Pillars.  This was a three bed-roomed house with three reception rooms, two bathrooms, laundry, kitchen and wine cellar, not to mention dressing rooms, attics etc; and a lift.

In 1999 a report by historic Scotland advised that remedial work was necessary in the church. A programme of repairs was begun in August 2003 and completed in 2004.  This included stripping and replacing the roof, repairing all the guttering, complete external re-pointing, moving the stone altar forward, installation of under-floor heating and a loop system. The building was also redecorated and new pew cushions added.  During the excavations human bones were revealed.  They proved to be of some twenty one adults and ten children possibly of the MacLellan clan.  They were re-interred in the chancel.

On completion of the restoration a service of Thanksgiving and Celebration was held. Generous funding was received from the Heritage Lottery Fund, Historic Scotland, the Scottish Episcopal Church, Scottish Churches Heritage Fund, Kirkcudbright Common Good Fund, members of Greyfriars Church and many other people.

A History of Greyfriars